A familiar face around Hoosier Park this past summer has been named 2018 Caretaker of the Year. Shelia Napier, longtime caretaker for the Chris Beaver Stable, has been seen many times walking Custom Cantab, the standout Indiana-bred trotting filly, into the winner’s circle at Hoosier Park. 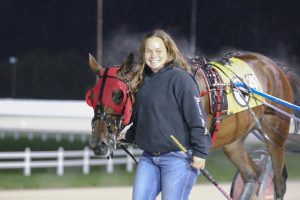 Shelia Napier, caretaker for Custom Cantab, has won the 2018 Caretaker of the Year award. Ironically, the ISA Website used her photo to encourage Indiana-associated horsemen and horsewomen, to nominate caretakers associated with the state’s racing program. (Photo by Dean Gillette)

A native of Cincinnati, Napier has been working for Beaver for the past three years, according to a press release sent out by the U. S. Harness Writer’s Association (USHWA), who helps coordinate the award sponsored by Hard Rock Rocksino Northfield Park.

In the press release, Beaver was quoted from his nomination letter regarding Napier: “Her horses are never shorted on the care that I expect for them and that is required. She can’t stay away from her horses. She truly loves them and takes incredible pride in their accomplishments. My life would be a lot easier if more grooms brought the passion into their work that Sheila has.”

Napier also commented on Custom Cantab in the release:  “Oh, that filly. Custom Cantab is one of those special little fillies that wants to finish in the top three her whole life. She’s quite sassy, amazing and full of heart. I absolutely love that filly; she is very special.”

Napier received $500 and two tickets along with accommodations to the upcoming USHWA Dan Patch Awards banquet in Orlando Feb. 24, 2019. She will be presented a trophy at the event.

The ISA Website posted a story last fall to encourage all horsemen and horsewomen associated with Indiana racing to nominate local heroes that care for the horses. Napier’s photo was used with the story to promote the award.