Fresh on the heels of the track record tying performance by Rockin Nola in the top older fillies and mares class for pacers, Mystical Carrie secured the title in the record books with a track record effort Saturday, Aug. 28, winning the event in 1:48.3. Guided by Trace Tetrick, the win was her third of 2021. 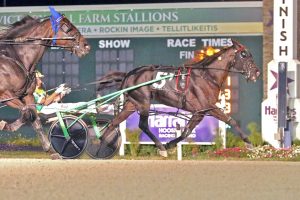 There was a lot of action early on in the $22,000 Fillies and Mares Open Pace as horses were three wide in the first turn with the first quarter clocked in :25.3. Mystical Carrie had gotten away in mid pack and let the field settle before making her move to the lead at the half in 53.3. She was followed by Rockin Nola and Joey Putnam, who waited for the stretch to make their attack.

At the head of the stretch, Rockin Nola had the top spot secured and was strong down the stretch, but Mystical Carrie came up the inside and was able to snag the win by a neck over Rockin Nola, pacing home in :27.0. Genie Rockwell and James Yoder finished third to round out the all Indiana-sired trifecta in the race.

Mystical Carrie is owned by Mystical Marker Farms and is trained by Erv Miller. The mile was a new personal best for the four-year-old daughter of Tellitlikeitis, who is a home bred by Mystical Marker Farms. She has been first, second or third in nine of her 10 starts this season and pushed her career earnings tally over the $300,000 mark with the win. She now has 14 career wins