A little rain didn’t damper the success of the Jack Myers Racing Stable Tuesday, Aug. 27. After the Elite Series was moved to the Jay County Fairgrounds in Portland due to rain at the Indiana State Fair, racing pressed on and so did the horses from the Myers Stable. The horses trained by Jack Myers and driven by Alex Udell, with the exception of J-S Swanman driven by Mike Peterson, rolled through the sloppy track surface to win six of the 14 races on the card. 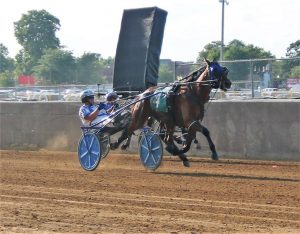 J-S Jasper and Alex Udell, shown winning at the Indiana State Fair earlier this season, was one of six winners for Jack and Sue Myers Racing Stable during Elite Series action at Portland. Photo by Diane Shuler

The Myers Stable’s day made a turn in the fifth race as J-S Miss Ruby trotted gate to wire to win her division of the two-year-old trotting filly Elite Series. The time of 2:03.2 for the Jailhouse Jesse filly was a new lifetime mark. She has only missed the top three once in 11 starts for 2019.

J-S Miss Ruby kicked off a string of four straight wins for the Myers Stable. J-S Miss Carly won the other division of freshman trotting fillies, striding out to an 18-plus length win at the wire in 2:02.3. It was the eighth win in 10 starts this season for the Guccio filly.

J-S Ivan the Great was the third horse to make it to the winner’s circle for the Myers Stable. The Swan for All gelding trotted his mile in 2:04.3, a new lifetime mark for the two-year-old trotter.

J-S Jasper made it a clean sweep in the two-year-old trotting ranks with a gate to wire win in 2:01.1. The Big Stick Lindy gelding now has eight wins in nine starts this season.

After a little break, the Myers Stable was back in the winner’s circle for the three-year-old trotting ranks, sweeping both divisions. J-S Swanman earned the victory in the first division in a time of 1:59.4 with a final panel in :28.3. Jesse Popper gave driver Udell his fifth win on the day in the final race, the second division of three-year-old trotting colts. The Sing Jesse Sing gelding won by more than 21 lengths in a time of 1:59.2. Jesse Popper now has six wins in 16 starts for 2019.