Msnaughtyashill, the trotting standout trained by Jeff Edwards who is now under the care of Brian Hauck at Pompano Park, is now two for two since arriving in Florida. The four-year-old daughter of Muscle Hill won the $9,000 Open II Wednesday, Dec. 5 with Kevin Wallis in the bike. 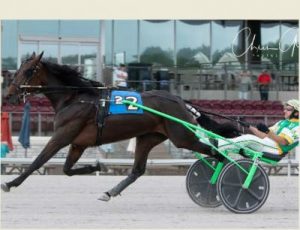 Owned and bred by Denise Dennis and Dolne Farm Services LLC of , Msnaughtyashill led the field wire to wire before striding out for the win by two lengths in 1:55.3, a final panel in :29.2. Although she is not Indiana sired, she has strong ties to Indiana. She is the daughter of Msnaughtybutnice, who competed in Indiana Sires Stakes action for Edwards, Dolne Farm and Dennis. Msnaughtybutnice is also by the Indiana Sires Stakes champion Scramble Ranger, who was also campaigned by Edwards and Dennis.

Msnaughtyashill also has a successful sister in Msnaughtybynature, who is an Indiana Sires Stakes winner and was campaigned by Trainer-Driver Peter Wrenn for Melanie Wrenn and The Kales Company. Msnaughtybynature completed her racing campaign with a mark of 1:56 and earnings in excess of $642,000.

Msnaughtyashill now has six wins in 21 starts this year for her connections. Two of those wins were taken at Harrah’s Hoosier Park this past summer.