It was another great day for the Doug Rideout barn on the Indiana Sired Fair Circuit (ISFC) Friday, June 17 at the Harrison County Fairgrounds. Horses from the Rideout barn swept the two-year-old trotting filly division plus another win from undefeated Mr Knowitall in the first division of freshman trotting colt and geldings. 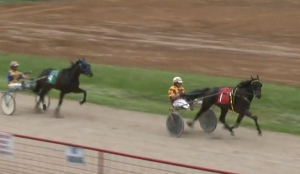 Mr Knowitall and Doug Rideout rally home for their third straight win in the ISFC at the Harrison County Fairgrounds Friday, June 17.

Starting from post one, Rideout took his time at the start with Mr Knowitall and placed the gelding behind A Majorsmackin and Bradley Ferguson at the start. They followed along through fractions of :33.3 and 1:08.4 before making a move to the outside to challenge. However, A majorsmackin was not going away easy. He kept Mr Knowitall on the outside past the three-quarters in 1:41.4 over the rain soaked track.

Mr Knowitall finally cleared in the final turn and trotted home with a strong finish for the win by two and one-half lengths in 2:14.4. A Majorsmackin finished a strong second over CS Amillionstars and Jay Cross for third.

Mr Knowitall is owned by Julie Rideout and Dr. Alan White. The You Know You Do son was bred by Joe Hostetler, who is now three for three in his brief career. He is from the first crop of You Know You Do and his best time so far was taken at Converse in 2:09.0 in his racing debut.

Rideout also had another You Know You Do winner on the day as If Not For You kicked off the ISFC card in the first race with a win in 2:23.1. Rideout placed the filly right on the lead and was an open length winner over Edge of Rejoicing and Carrie Hollman. Bucks Princetonian and Gerald Miller finished third.

Julie Rideout and Pure Cotton Stables own If Not For You, who is two for three in her brief career on the ISFC. Her best time was taken at Converse last week in 2:12.0.

Other winners in the freshman filly ranks for Rideout were Unforgettable, a daughter of Helpisontheway in 2:16.0 and Cash in the Bank in 2:17.0.

In the three-year-old pacing ranks, the sophomore pacing filly Vel Goodgollymolly and Gerald Miller turned in the fastest time of the day with a win in 2:06.0. The Hypnotic Blue Chip daughter won by a half length over Zig Zag Zoom and Carson Conrad. Velstraightdreamer and Bradley Ferguson finished third.

Vel Goodgollymolly is owned by King Racing Stable. Funk Racing Stable bred the filly, who is trained by Larry King.