With racing winding down in Indiana, local horses are venturing to other venues with Moscato and Charlie Conrad getting an impressive win at Oak Grove Racing & Gaming in southern Kentucky. The duo won by six and three-quarter lengths in a time of 1:56.0 as favorites of the field. 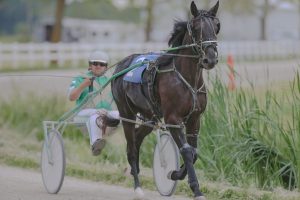 Starting from post one, Moscato motored out to the lead quickly for Conrad, posting the first quarter in :27.4 before getting a breather in the second quarter, passing the half in :58.4. From that point home, Moscato kicked into gear and held a strong lead all the way to the wire, pacing home in :29.1. Grand Ole Party and Cordarius Stewart finished second followed by Issachar and Jordan Patton for third.

Owned by Sarah Conrad, Michael Allen, and Carder and Carson Conrad, all of Indiana, Moscato earned a new career best time in the mile. The Always A Virgin three-year-old competed earlier in the season on the Indiana Sired Fair Circuit. She increased her career bankroll to more than $22,000 with the win at Oak Grove.

Another Indiana sired winner on the day was Maple Grove Grady. Driven by Stephan Halford II, the three-year-old Mr. Cantab gelding also turned in a gate to wire performance for the win in 1:57.1. Maple Grove Grady is owned by breeder Joe Mullins and trained by Jamaica Patton.

Oak Grove is in their first season of racing. The brand new facility, just north of Clarksville, Tenn., has six more programs through Wednesday through Nov. 23. Kevin Mack is the racing secretary for the meet.