Morairtime, the Indiana sired trotting mare, was a winner in the evening’s featured $20,000 Open Handicap at Dover Downs Tuesday, Feb. 16. Driven by Jack Parker, the mare scored the win in 1:53.4. 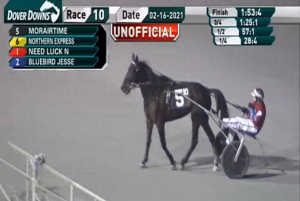 As soon as the gate sprung, Morairtime was out and trotting to the lead. The Airzoom Lindy daughter moved with ease to the front, posting fractions of :28.4, :57.1 and 1:25.1 before trotting home in :28.3 for the win. Northern Express finished one length back in second for driver Russell Foster while Need Luck N and Andrew McCarthy finished third, just a neck ahead of another Indiana sired contender Bluebird Jesse and Tim Tetrick.

Morairtime was a bit of a surprise for the win, paying $11.60. She is trained by Carol Jamieson-Parker and owned by James Moore III of North Carolina, who has owned her since the fall of 2019. John Bontrager Jr. of Millersburg, Ind. bred the trotting mare, who now has in excess of $231,000. With 11 career wins, her career best time of 1:52.2 was taken at The Meadowlands last year at four. Although her win at Dover was the first of 2021, she has only finished off the board once this year in five starts.

Earlier in the card, another Indiana sired trotter made his way to the winner’s circle as Swan Legacy and Tim Tetrick scored the conditioned trot win in 1:56.1. Trained by Scott DiDomenico, Swan Legacy floated to the back of the pack early as Lady Jeter and Victor Kirby led the field through the first quarter in :28.4. Embrace the Grind and Pat Berry moved to the lead before the half in :57.2, giving Swan Legacy the cue to get into the outer flow for the second half of the race.

Swan Legacy began to pass horses in the final turn and dug in gamely in the stretch, winning by a neck over Lady Jeter. Embrace the Grind finished third.

Owned by Triple D Stables Inc. and Michael Ferriero, Swan Legacy is now three for four in 2021. He was purchased by his new connections in mid-December of 2020. The Swan for All four-year-old gelding took a new lifetime mark earlier this year in 1:54.1 at Dover Downs. He now has eight wins in 32 career starts and more than $74,000 in earnings. Richard Fry of Topeka, Ind. is the breeder on Swan Legacy.