It was a good night for the team behind the LeWayne Miller Stable. The crew sent out Dewtiful’s Grace as a winner in the $18,000 Mya Tri Final along with Swan Diego, winner of the $18,000 Cardinal Final. 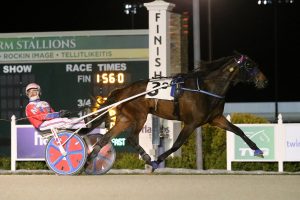 Dewtiful’s Grace and Miller wasted no time getting to the lead of the Mya Tri final. The three-year-old Pine Credit filly led the field gate to wire through fractions of :28.4, :58.0 and 1:27.2 before holding steady in the stretch and winning by one and three-quarter lengths in a time of 1:56.0. Dewtiful’s Grace trotted home in :28.3 to win over No Parking Zone and Ricky Macomber Jr. and Sister Jean, driven by John DeLong.

Dewtiful’s Grace is owned by Oakwood Farms, Kristen Wagler, Hillside Stables and Eleven Star Stables. Clifford Slusher of Macy, Ind. bred the filly, who is now three for three in 2021, sweeping the Mya Tri Series. Lightly raced at two, Dewtiful’s Grace is now five for seven in her career and her time of 1:56.0 in the final was a new career best.

Joining stablemate Dewtiful’s Grace as a winner on the night was Swan Diego, winner of the Cardinal Final later in the card. Also driven by Miller, Swan Diego got away in mid pack as early leader Fearless Tom and Rocky Loney set the first fraction of :28.3.

Down the backstretch, Miller moved out to the passing lane after Fox Valley Specter moved to the lead, leaving Swan Diego on the outside at the half in :58.0. The three-year-old Swan for All gelding got the lead shortly after the half and opened up on the field, trotting home in :28.4 for the win in 1:56.2. Fox Valley Specter finished one and three-quarter lengths back in second followed by ER Nelson and Don Eash for third.

Swan Diego was a bit of a surprise to bettors, paying $10.60 for the win. The sophomore trotter is owned by Lester Raber, who also bred the gelding. It was the second win of the year in three starts for Swan Diego and the second straight trip to the winner’s circle. The time in the final also lowered his career best.

Raber also scored a win earlier in the card with Spell Cuteypie, a filly he trains. Driven by Trace Tetrick, the three-year-old Guccio filly was a comfortable winner in 1:59.4 over Merciimeme and Dale Hiteman followed by Worth Your While and Robert Taylor. John Wittmer owns and bred the filly, who earned her first win of the season in her third start. She raced on the Indiana Sired Fair Circuit last year at two, winning four races and finishing second four times in 11 starts.

The final series of the night, the $18,000 Chad E. Carlton Trotting Series, was won by Illini Earl and Trace Tetrick. The duo is a perfect three for three in 2021 for trainer Walter Haynes Jr. and owners Jeff Fought Racing, Brian Carsey and John McGill. The Jailhouse Jesse three-year-old gelding was bred by the University of Illinois. Illini Earl earned a new career best time with the win in 1:54.3.