What a weekend it was for driver LeWayne Miller and trainer Dylan Davis. After connecting to win the Open Pace Friday with Castle Flight in track record time, the duo came back and won two more races on the Saturday, June 1 card, including the $20,000 Open Trot with Donatover. In all, Miller scored six wins in two nights while Davis moved up the training ranks with four wins. 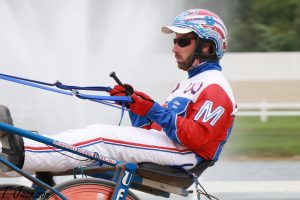 In addition to their win with Castle Flight in 1:47.2 to equal the track record at Harrah’s Hoosier Park Friday, May 31, Jet Airway was a winner for the pair, marking his first win of 2019. The now eight-year-old son of Jereme’s Jet was the leading horse in wins early in the meet in 2018 and ended up with 12 wins for the year.

Miller scored one other win on the Saturday, June 1 racing program for Davis with Abraxas Blues A in a conditioned race. He completed his night with a win in Indiana Sires Stakes action for three-year-old pacing fillies with Rockin Nola for trainer Joe Putnam in 1:51.0. The Rockin Image filly is now two for two in 2019.

Miller, who has been driving since 2009, is now nine wins away from his first driving milestone of 1,000 wins. The 32-year-old driver from LaGrange, Ind. is also close to eclipsing $12 million in purse earnings.

Born in Vermont, Davis is now a resident of Delaware. He is less than 30 wins away from 2,000 career training victories.