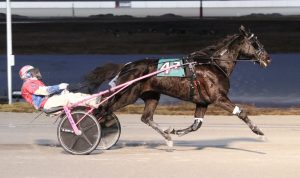 Starting from post four, Milford’s Z Tam headed straight to the lead, establishing fractions of :28.3 and :58.2. He was challenged on the outside by Vincenti and Dan Noble at the half, before he backed off. A second challenger came into the picture on the outside at the three-quarters in 1:28.1, but the veteran Milford’s Z Tam held his ground, trotting the final quarter in :29.4 for the win by one and one-half lengths. Vicenti came back to finish second over Indiana sired Just For Us, owned by Bonnie Mattingly and driven by Tony Hall for third.

Milford’s Z Tam paid $7.40 for the win. The nine-year-old Swan for All gelding is owned by William Hartt of Maine and trained by Michael Hitchcock. Alan Troyer bred the gelding.

It was the first win of the year for Milford’s Z Tam, who has won and raced every year since kicking off his racing campaign at two at Harrah’s Hoosier Park in 2015. He now has 26 wins in 175 career starts with earnings over $450,000. His career best time of 1:54.1 was taken as a four-year-old at Scioto Downs and equaled as a five-year-old the next season at Scioto. He has been with his current connections since his six-year-old year.

Milford’s Z Tam was part of the third crop of Swan for All and brought $19,000 through the sale ring at the Indiana Premier Yearling Sale under the name Gucci Guy. He was one of 61 sold that season through the yearling sales. He is the second foal from Northern Mystique, a daughter of Kadabra who earned a mark of 1:57.0 and more than $70,000 before retiring to brood mare duty. Milford’s Z Tam is the second of four foals of racing age, joining Sophia Lia as a good racehorse, who has a mark of 1:54.1 and earnings of nearly $200,000. He is also a full brother to Fantasia Flurry, who has a mark of 1:56.1. The family also has a yearling full sister named Cupcakes N Candles, who will be selling this fall.