Mildrix was one of several Indiana sired winners on the racing program at Miami Valley Raceway Friday, Feb. 19. The six-year-old Real Desire mare was driven to victory by Dan Noble. 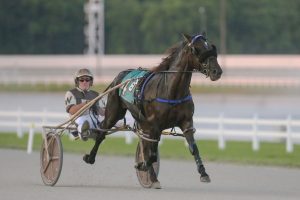 Starting from post five, Mildrix went straight to the lead as the favorite of the conditioned pace field for females, setting fractions of :29.0, :58.0 and 1:26.1 before rallying home in :28.2 to win by three-quarters of a length over Sandy Sue and Trace Tetrick, American Cheer and Josh Sutton edged out Indiana sired It’s Time for Fun and Kyle Wilfong for third. The time of the mile was 1:54.3.

Mildrix is owned by Wilfong Racing LLC and Peter Redder. Redder also trains the Kelly Goodwin-bred mare, who earned her second win of 2021. She now has 15 career wins in 78 career starts with earnings over the $220,000 mark. Her career best time remains at 1:51.1 taken as a four-year-old at Dayton Raceway.

Earlier in the evening, MJ’s Riggins Rebel and trainer-driver LeWayne Miller scored a win in the $14,400 conditioned pace. After getting away in mid pack, MJ’s Riggins Rebel followed cover toward the leaders and flipped out to advance on the outside, timing his move just right for the win by a neck over Leave’eminstitches and Brett Miller in 1:55.2. Candy on the Beach and Tyler Smith finished third.

MJ’s Riggins Rebel is owned by Jeremy Bybee and was bred by Mike Hollenback. The Indiana sired four-year-old mare by Riggins has now won two races in 2021 and seven lifetime. She took her career best time last year at Harrah’s Hoosier Park in 1:52.4.

Indiana sired Makeitagaingo was also a winner on the card. After fighting for the lead at the quarter in :28.4, the four-year-old daughter of Riggins took over for driver Jordan Ross and never looked back, posting the win in 1:55.1, one and three-quarter lengths over fellow Indiana sired Fancy Riggin and Trace Tetrick and Smoknthemnbluejeans and Brett Miller, who dead heated for second.

Makeitagaingo, who won a lot of races on the Indiana Sired Fair Circuit at two, is owned by Devon Miller of New Paris, Ind. Robert Taylor trains the mare, who is now 10 for 26 in her career. Her two-year-old mark of 1:53.2 at Harrah’s Hoosier Park remains as her career best. She has only finished out of the top three once in five starts for 2021 for her current connections. Marlin Miller of New Paris, Ind. bred the mare.