A total of 98 were cataloged for the Midwest Mixed Sale at the Michiana Event Center in Shipshewana, Ind. Tuesday, Nov. 23. The sale began immediately following the Michiana Classic Yearling Sale. 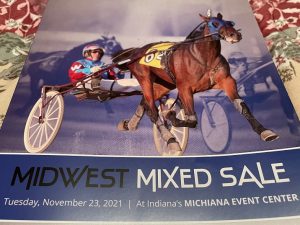 The Midwest Mixed Sale was completed Tuesday, Nov. 23 at the Michiana Event Center in Shipshewana. Many brood mares sold for great prices to top the sale.

Another top seller in the Mixed Sale was another member of the Winterwood Farm consignment, Shes Lights out, a daughter of Somebeachsomewhere. The mare sold for $52,000 to Swiss Boarding Farm. With a mark of 1:51.1, she is carrying her first foal by JK Endofanera.

Flow and Go was also a top seller at the sale. The Yankee Glide mare is in foal to Swan for All and brought $50,000 through the ring. She was purchased by John Lengacher from the In-Law Stables consignment. The mare is carrying her first foal and is a sister to the dam of May Baby.