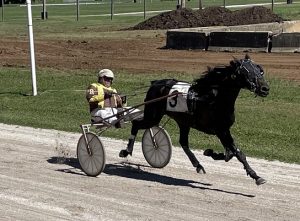 Driven by Doug Rideout, Midnight Cookie got away in the pocket just behind SJ’s Edith and followed her through fractions of :30.4, 1:03.4 and 1:36.0 before tipping out around the final turn and trotting home in :28.3 over a good track for the win by a neck in 2:04.4. SJ’s Edith and Mike Peterson finished second over Sunset Jetta and Chad Clark for third.

Midnight Cookie is owned by Phillip Graber and was bred by Lester Helmuth. The sophomore filly is a daughter of Thundercrack, who stood in Illinois and bred a handful of mares from 2009 – 2016 before moving to Indiana. Midnight Cookie is one of eight foals that are three-year-olds this year. She now has five wins this year with a best time of 2:01.3 taken at Converse in mid-June. She now has over $20,000 in career earnings.

The Lester Raber-trained Pilgrims Image was also a winner in the three-year-old colt and gelding trotting division. Starting from post five, driver Jordan Ross took his time with Pilgrims Image before moving out before the half and pursuing the lead. After the half in 1:04.1 over the track that received even more rain, Pilgrims Image finally got the lead after the three-quarter mile marker in 1:35.0. The Pilgrims Chuckie gelding drew away from the field, turning in a final panel in :29.1 for the win by eight and one-half lengths in 2:04.1. Virgnes Kenny B and Jack Kieninger Jr. finished second. Charm N Caesar and Mike Peterson finished third.

Raber also owns Pilgrims Image, who was bred by Walter Hilty. The sophomore trotter now has 10 wins this season and his best time this year was taken at the Indiana State Fairgrounds in early September in 1:59.0. His career best time stands at 1:58.2 taken as a two-year-old at Harrahs Hoosier Park. Pilgrims Image has now won five straight races on the ISFC.