The fifth annual Michiana Classic Yearling Sale was conducted Tuesday, Nov. 23 at the Michiana Event Center in Shipshewana, Ind. A total of 98 yearlings were sold with the highest priced yearling being knocked down at $30,000. 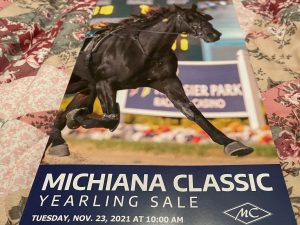 Tabasco Cat, a son of Tellitlikeitis, was purchased by Kim Roth, agent for Rock and Roll Stables of Crete, Ill. as the highest priced yearling of the event at $30,000. The colt is out of a 100 percent producing mare, Southwind Mocha, who is the dam of Smooth Mocha (Skydancer Hanover, 1:53.1, $99,000) and Southside Kid (Skydancer Hanover, 1:53.0, $59,000). The second dam is the outstanding race mare Musical Dreamer, who earned more than a half million during her career with a mark of 1:50.4.

Several yearlings sold between $20,000 and $30,000 with the second highest purchased by Freeman Mast of Southern Illinois. Fivestar Photo, a filly by You Know You Do from the In Law Stable consignment, was purchased for $27,000. The filly is a half-sister to King Felix, who took a mark of 1:55.2 and earned nearly $100,000. Her second dam is Miss Athens, who is the dam of Major Athens who is now a sire and earned more than three-quarters of a million during his racing career.

Another top seller in the Michiana Classic Yearling Sale was near the end of the sale. Trotting Marky, a gelded son of You Know You Do, was from the Brookview Farm consignment and was purchased by Cassie George of Anderson for $26,000. The gelding is a half-brother to Whom Shall I Love, who took a mark of 1:56.4 and earned more than $68,000 this past season.