John Merkel hung up his driving and training gloves two years ago to serve as the Indiana Standardbred Association Horsemen’s Representative. But his time away from the barn was short-lived as he returned to training last year. This year, he’s back in the full swing of action on the Indiana Sired Fair Circuit (ISFC) and scored a driving and training double on his home track Tuesday, Aug 24 during the stop on the ISFC circuit. 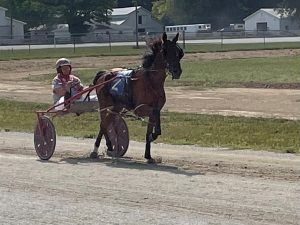 Goldies Rockin was one of two wins on the Tuesday, Aug. 24 racing program for trainer-driver John Merkel at the Shelby County Fairgrounds. Photo by Tammy Knox

Merkel kicked off his morning with a win in the first race with Goldies Rockin in a division of two-year-old pacing fillies. The Rockin Image filly went straight to the lead with authority and never let anyone get close to her, drawing off to a seven and three-quarter length win in 2:02.1, her first career win. Rockstars Dynamite and Jordan Ross finished second in a photo finish over Jammin Judy and Matt Rheinheimer for third.

Goldies Rockin was making her eighth career start. She raced earlier this year at Harrah’s Hoosier Park, pacing in 1:55 several times and even tried her hand in Indiana Sires Stakes action. She was making her first start on the second chance series of the ISFC for owners Merkel and John Vorbeck of Corydon, Ky.

Merkle returned to the winner’s circle in the second division of two-year-old trotting fillies as Double A Samantha also scored her first career win. The Muscle Massive filly got away second behind ABC Tucky and Matthew Avenatti and sat patiently through early fractions of :31.3 and 1:02.0 before moving to the outside and driving by to take over after the three-quarter mile marker in 1:34.0. Double A Samantha also opened up on the field, posting a final panel in :29.4 to win by eight and three-quarter lengths in 2:03.4, the fastest of two divisions on the day for freshman trotting fillies. ABC Tucky finished second over CS Massive Gem and Floyd Raber, who recovered from a break to come back and finish third.

Double A Samantha is owned by Merkel and Daniel R. Smith of Fountaintown, Ind. Although Daniel was working, his wife was trackside to greet Merkel and Double A Samantha after the win. She is now two for two on the ISFC, winning at Portland earlier in August. The mile was a new career best for the well-built filly.

Double A Samantha was bred by Double A Acres. She is part of the first Indiana crop of Muscle Massive and was purchased for $8,000 last year at the Hoosier Classic Yearling Sale. Muscle Massive stood several seasons in Pennsylvania before relocating to Indiana with his first crop racing this season.