The start of a new year always brings in a new board for the Indiana Standardbred Association (ISA). The first meeting was held Monday, Jan. 7, 2019 at the ISA office in Greenfield, Ind. Included on the list of items for the agenda was filling two positions during the upcoming 2019 racing season at Hoosier Park. 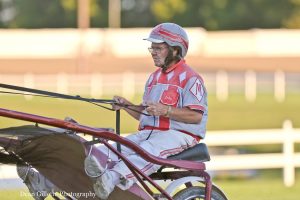 John Merkel, longtime horseman in Indiana, will fill the role of ISA Horsemen’s Rep for 2019 at Hoosier Park. (Photo by Dean Gillette)

John Merkel, longtime horseman in the state of Indiana, will serve as the 2019 Horsemen’s Representative. A native of Evansville, Merkel was the longtime trainer for Dr. Luel Overstreet’s Bluegrass Farm out of Henderson, Ky. and conditioned many champions, including the million dollar winner Dorunrun Bluegrass.

When pari-mutuel racing began at Hoosier Park in 1994, the Bluegrass Farm began breeding mares in the state and continued their success with the help of Merkel, who has scored many Indiana Sires Stakes wins over the years.

In recent years, Merkel has branched out on his own and now stables and races out of the Shelby County Fairgrounds in Shelbyville. He races at both Hoosier Park and the county fair circuit.

Also hired for the 2019 racing season at Hoosier Park is Mark Reisert, who will serve as the Gator Driver for the season. Reisert, originally from the Connersville, Ind. area, now resides in Chesterfield, Ind. and has been associated with racing in the state of Indiana for more than three decades.