Meant Tobe Shooter added another win to his credentials Thursday, May 27 at Harrah’s Hoosier Park. The now 10-year-old Indiana sired gelding continues to churn out good performances and scored his latest win in the claiming ranks in 1:54.0. 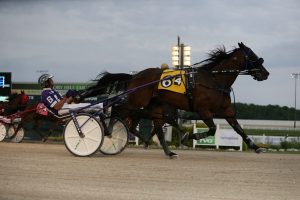 Meant Tobe Shooter scored another career win Thursday, May 27 at Harrah’s Hoosier Park. The 10-year-old gelding went over the $300,000 mark in the process. Photo by Dean Gillette

Starting from the center of the track for driver Brandon Bates, Meant Tobe Shooter left the gate seeking a spot near the top early on. Dojea Rock and Matthew Riggle set the early fractions of :27.0 and :56.1 as traffic in the outer flow began to form, flushing Meant Tobe Shooter to the outside in first over fashion.

In the stretch, Meant Tobe Shooter got into gear and took over, fending off the field to win by one and one-quarter lengths over Always Relentless and Bradley Ferguson. McLegend and John DeLong finished third.

Meant Tobe Shooter was the heavy favorite in the field. The son of Sand Shooter is trained by Walter Haynes Jr. and owned by Tracy Livingston and Samuel Samples of Indianapolis. Alvin Schwartz bred the gelding, who earned his first win of 2021 in the event.