Meadowbrook Tiger, former Indiana Sires Stakes champion and Horseman’s Stakes winner at the Indiana State Fair, is still on the winning track. Now seven, the son of Shadyshark Hanover picked up his most recent win at Isle of Capri Pompano Park Thursday, Jan. 14. 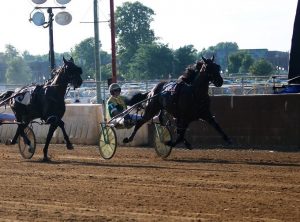 Meadowbrook Tiger and Trace Tetrick are en route to a victory in the Horsemen’s Stakes at the Indiana State Fair in 2017. Photo by Dean Gillette

Driven by Kevin Wallis for trainer Cory Kreiser, Meadowbrook Tiger began the claiming event from post three and got away in mid-pack as Cardiac Fashion and David Miller flew out for the early lead, setting the first fraction in :27.1. Heading to the half, Meadowbrook Tiger was flushed to the outside and endured a first over trip as he closed in on the leader around the final turn. In the stretch, Meadowbrook Tiger paced home in :29.2 to earn his first win of 2021 in his second start, coming up a winner by a neck over Cardiac Fashion in a time of 1:53.4. Creighton Hanover and Tyler Shehan finished third.

Owned by Gina Young, Meadowbrook Tiger paid $6.00 for the win. The Freeman Bontrager bred gelding was claimed out of the race by Play by the Rules Stable.

It was the 16th win of his career for Meadowbrook Tiger, who has in excess of $286,000 in earnings. His career best time remains at 1:50.1 taken at the Indiana State Fair during Grand Circuit action in 2017 at three.

Other Indiana sired winners on the card included another win from Toy’s For You in the conditioned trot. Trained and driven by Rick Plano, the Airzoom Lindy five-year-old gelding has come into his own of late, scoring another win for Plano. The Luckiana Farm bred gelding scored the gate to wire win in 1:53.4, finishing three-quarters of a length ahead of Creekside Pete and Andy Shetler. Jax Reddy and Kevin Wallis finished third.

Toy’s for You is now two for two in 2021. The mile also marked a new career best for the Indiana sired trotter, who increased his bankroll to more than $33,000 with the win.