Meadowbrook Chip, the former Indiana Sires Stakes contender at Harrah’s Hoosier Park, earned his second win of 2021 Monday, April 26 at Isle of Capri Pompano Park. The four-year-old son of Whom Shall I Fear was a winner in 2:01.0. 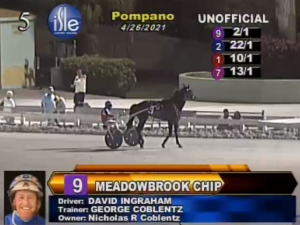 Starting from the outside post eight, Meadowbrook Chip and David Ingraham opted to move to the tail of the first group as Horoscope and Wayne Henry established the tempo of the race through early fractions of :30.1 and 1:00.3. Heading to the half Ingraham had Meadowbrook Chip out and advancing on the outside and eventually picked up cover heading to the three-quarter mile marker in 1:30.3.

As the field approached the final turn, Ingraham tipped Meadowbrook Chip three wide and was able to pass his cover, sitting in second around the final turn. In the stretch he matched strides with Horoscope and appeared to be ready to drive right on by, but Horoscope was not giving in easily. The two trotters finished in near unison at the wire, giving Meadowbrook Chip the slight edge by a nose on the outside of Horoscope. Reve Mon Amour and Alessandro Spano finished third.

Owned by Nicholas Coblentz, Meadowbrook Chip is trained by George Coblentz. His new connections have had him since late December. The gelding was bred by Freeman Jay Bontrager of Topeka, Ind. He now has four career wins with earnings over the $20,000 mark. His career best time was taken earlier this year at Pompano in 1:56.2.