Meadowbrook Chip, the Indiana sired son of Whom Shall I Fear, closed out 2020 with a victory at Pompano Park Wednesday, Dec. 30. The three-year-old gelding turned in a commanding performance for the win by four lengths in 1:58.1. 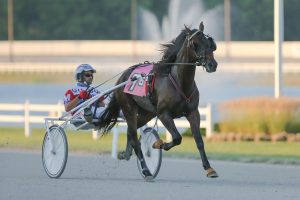 Meadowbrook Chip, shown with driver LeWayne Miller earlier this year at Harrah’s Hoosier Park, closed out 2020 with his second win of his career at Pompano Park. Photo by Dean Gillette

Driven by Mike Simons, Meadowbrook Chip went to the back of the pack from the start, and was parked along the outside in ninth as Midnight City and Wally Hennessey were pressured to the first quarter in :28.2 by Dotheboogaloolindy and Kevin Wallis. Dotheboogaloolindy grabbed the top spot before the half in :57.1 but a line of horses created an outer flow lane all the way back to Meadowbrook Chip, who could not find a spot along the rail.

After following cover to the three-quarter mile marker, Meadowbrook Chip was forced three- wide around opponents and by the top of the stretch, he had placed a neck in front for the stretch drive home. A few taps and Meadowbrook Chip was in front of the field by open lengths, cruising home for the win. Dotheboogaloolindy finished second over Brilliant Bob and Tyler Shehan for third.

A surprise winner, Meadowbrook Chip paid $11.00 for the win in the Non winners of 2 event. Bred by Freeman Bontrager, the sophomore trotter is owned by Nicholas Coblentz and trained by George Coblentz. He now has in excess of $12,000 this season in 11 starts. His career best time was taken earlier this year at Harrah’s Hoosier Park in 1:57.1.

Other Indiana sired winners on the Wednesday card at Pompano included Toy’s for You, a four-year-old son of Airzoom Lindy. Owned, trained and driven by Rick Plano, he was a near gate to wire winner by three lengths in 1:55.1 with a final panel in :28.3. Toy’s for You was also an upset winner on the night, paying $17.20 to win. The win was a new career best for the gelding bred by Luckiana Farms. He now has in excess of $25,000 in career earnings.