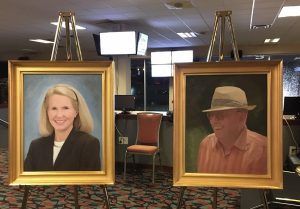 Portraits of Sarah McNaught and Howard “Pete” Peterson were created by artist Mark Dillman. The portraits will hang in the mezzanine on the IHRA Hall of Fame display wall. (Photo by Tammy Knox)

“How I describe and put in historical perspective the contributions of Sarah is to refer to a time in American History known as the ‘era of good feelings’ from 1815 to 1825 under President James Monroe,” said Keeler. “When Sarah took over, the IHRC entered into an era of good feelings. She accomplished all of that by her quiet style of leadership. Everyone got their say and she led by example. She faced some tough and difficult problems, including the implementation of slots and living through the great recession where both tracks went into bankruptcy, just to name a few.” 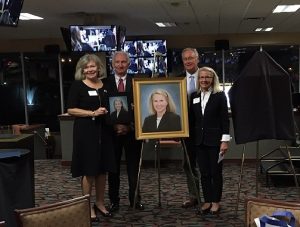 Sarah McNaught stands next to her portrait that will hang on the IHRA Hall of Fame display wall at Indiana Grand. (Photo by Tammy Knox)

A portrait of McNaught was unveiled as she was introduced. She explained one of the first things she did after being named chairman by then Governor Mitch Daniels in 2005.

“When I accepted the job, I called Mike Schaefer and he shared his views and was a great advisor,” said McNaught. “I want to thank the directors of the IHRA. I’m very honored and it is great to be back in this room.”

Friends and family members of the late Howard “Pete” Peterson pose with the portrait created in his honor for the IHRA Hall of Fame induction. (Photo by Tammy Knox)

Following the induction of McNaught, Scott Snyder, longtime farm manager at Viking Meadows Farm in Carmel, Ind., took the stage to provide the reading of the proclamation of Peterson, his longtime boss. Snyder recapped Peterson’s career as a construction and real estate developer and the impact his business made on Indianapolis. Peterson later devoted a majority of his time to Standardbred racing with the development of Viking Meadows Farm. In addition to several top racehorses over the years, Peterson also campaigned several stallions, including Hi Ho Silverheel’s, Kentucky Spur and Super Ben Joe, who was named Indiana Trotting Stallion of the Year four times between 2001 and 2006.

“It was well known that ‘Pete’ loved his farm and harness racing in Indiana,” said Snyder. “He spent a lot of time on the farm and gave a lot of tours and traveled many miles to the tracks to watch his horses race. He never did anything halfway. Over time, he became more than a boss to me and I’ll always be grateful for the time I got to spend with him.”

Peterson and his wife, Delores, celebrated 64 years of marriage before his death in 2014 and raised five children. Several tables were filled with family members to celebrate the induction of Peterson, including son Bart Peterson, former Indianapolis mayor.

“I would like to extend a thank you on behalf of my mother, and my father admired Scott so much,” said Bart. “Our father came from a very poor background and built up a very big successful company. He worked very hard and it surprised us all when he announced he was retiring at the age of 55. He loved what he did and had fun. When he retired and got into horse racing, it brought him so much joy. He had so much fun for the last 30 years of his life. He would have really enjoyed seeing this tonight.”

The portraits of McNaught and Peterson were created by Mark Dillman of Indianapolis. They will join the portraits on display on the mezzanine level at Indiana Grand of the 11 other individuals who have been inducted into the IHRA Hall of Fame.