Mclass has been a consistent performer for the Dave and Susanne White Stable this season. Recently, his fan club has gotten a little bigger. Recently the gelding served as a chauffer for a first-time driver as Grace Kelley experienced her first trip around the Indiana State Fairgrounds track with White. 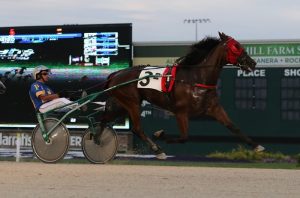 Kelley observed the races at the Indiana State Fair and her mother inquired about getting a more personal glance at the horses. Dave White offered a visit to his barn and a chance to jog Mclass. Since that time, the trotter has won two races and finished second in conditioned trotting action at Harrah’s Hoosier Park, including a new lifetime mark Sunday, Sept. 19.

Starting from post three, Mclass and Joey Putnam got away in mid pack as Sooo Handsome and Rick Plano led the way through fractions of :27.4 and :57.3. Putnam had the Bluto gelding out and rolling after the half and was in control of the race at the three-quarter mile marker in 1:26.3. From there, the five-year-old trotted home briskly to score the win by two and one-quarter lengths in 1:54.3 for a new personal best time. Crystal Ice and Robert Taylor overcame broken equipment early in the mile to finish second over Swan Fashion and John DeLong for third.

The story of Grace Kelley and Mclass will be featured in the upcoming issue of the ISA Magazine in a story penned by Ellen Taylor.