Final edits are going in the next issue of the Indiana Standardbred Magazine, which is due in homes in early May. The cover features the sole qualifiers held at Harrah’s Hoosier Park on the cover, which were captured by Dean Gillette through a driving snow storm. 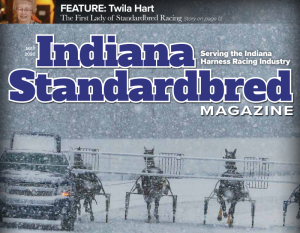 The May issue of the Indiana Standardbred Magazine is in final edits and will be available in early May. Photo by Dean Gillette

The 60-page edition includes several features of 2019 champions, including Grand Swan, Odds on Osiris and Bridge to Jesse’s. All three are prepping for the 2020 racing season with Grand Swan shipping to the East Coast for some upcoming stakes before focusing on the Indiana circuit. Odds on Osiris also has some stakes outside of the state for 2020.

Twila Harts, longtime Standardbred owner from Amboy, Ind., is profiled along with trainer-driver Robert Taylor. The issue also includes a look at Dean Gillette, official track photographer for the ISA Magazine and new track photographer for Harrah’s Hoosier Park once racing resumes. Other topics covered include John Campbell turning 65, a look at 20 of the top stories from the past two decades and details on the new Speed Office at the Jay County Fairgrounds.