May Baby, the standout Indiana sired trotting filly from the James Yoder barn, will step onto one of the biggest stages in harness racing as she competes for the title in the $600,000 Hambletonian Oaks Saturday, Aug. 8 at The Meadowlands. Slated as the ninth race on the card, May Baby and Yoder begin from post four at odds of 10-1. 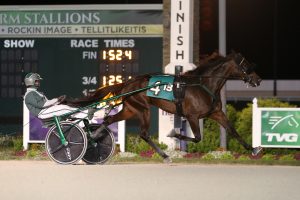 May Baby, shown with James Yoder winning in Indiana Sires Stakes action earlier this year, will seek the title in the Hambletonian Oaks Sat. Aug. 8, making her the first Indiana sired filly to win the prestigious event. Photo by Dean Gillette

May Baby traveled to New Jersey with a perfect record this season, winning three for three., and even winning all three of her qualifiers to kick off her sophomore campaign. She finished second last week in the prep to get her to the Hambletonian Oaks, a race in which she was parked for a lot of the mile and still trotted to a 1:52.4 mile.

May Baby is owned by James’ wife, Cheyenne. She was purchased from the Hoosier Classic Yearling Sale for $8,500. The Guccio filly has always been at the top of her game, winning six of 10 races last year. Earlier this year, she took a new lifetime mark of 1:52.3. She now has more than $277,000 in career earnings for her connections.

Joining May Baby in the quest for the 95th Hambletonian Oaks title is Reba Blue Chip, trained and driven by Verlin Yoder. The duo will start right to the inside of May Baby in post three at odds of 20-1.

Later on the Hambletonian card, the Yoders will also compete against one another in the $25,000 Vincennes Trot. Verlin’s older trotters It’s A Herbie and Compelling will start side by side from posts four and five, respectively. Verlin will drive It’s a Herbie, an Indiana sired son of Here Comes Herbie who has in excess of $412,000 on his card. James will drive Compelling, a daughter of Swan for All who has more than $222,000 in purse earnings.  for his father.

A few other Indiana sired horses are scattered throughout the Hambletonian Day card including Shamwow, who is now based on the East Coast. Campaigned by Trainer Missy Essig last season, the three-year-old Always A Virgin gelding has drawn post four in the first race under the direction of driver Jordan Stratton and trainer Jim King Jr. He is set at 15-1 on the morning line for his owners Jeff Fought Racing and David Fought of northern Indiana.