Last year’s two-year-old trotting standout in Indiana, May Baby, turned in another winning performance in qualifying action at Harrah’s Hoosier Park Tuesday, June 9. Driven by trainer James Yoder, the Guccio filly trotted gate to wire in a time of 1:57.3 to prepare for the upcoming racing season. 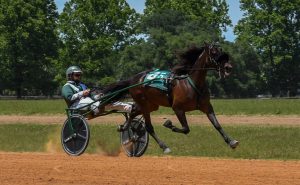 May Baby and James Yoder are now two for two in qualifying action this season. Photo by Cheyenne Yoder

Starting from post eight, May Baby rallied over to the rail quickly, leading the field through the first quarter in :29.4. Her lead continued to be comfortable through well-rated middle fractions before she scored the victory in 1:57.3. Bluebird Keepsake and Peter Wrenn finished second over RJZ First Lady and LeWayne Miller for third.

Owned by Cheyenne Yoder, May Baby won six of 10 starts last year at two. Her quickest time was taken in the fall at Harrah’s Hoosier Park in 1:53.2. Earlier this spring, she won her qualifier at Gil Crest Training Center in Bell, Fla. in 1:54.1.

Qualifiers will continue Wednesday, June 10 at Noon with two other sets scheduled for Friday, June 12 and Saturday, June 13 to prepare for opening night, which is Tuesday, June 16. Once racing resumes, the track will go back to two qualifiers per week on Wednesday and Saturday with a Noon post time.