It was a big match-up between two female powerhouses Wednesday, June 24 at Harrah’s Hoosier Park in the $33,000 Star Destroyer Final. May Baby and Rock Swan matched each other stride for stride in the stretch before May Baby got the edge at the wire by a nose in 1:52.3, just one fifth of a second off the track record for sophomore trotting fillies. 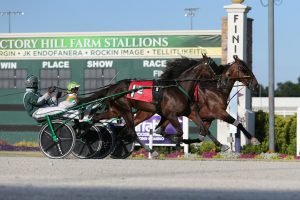 May Baby and James Yoder (outside) get the win by a nose over Rock Swan and Trace Tetrick. Photo by Dean Gillette

May Baby and James Yoder had the inside post in the five-horse lineup and used just enough speed out of the gate to get in behind Rock Swan and Trace Tetrick. Last year’s Freshman Trotting Filly Champ Rock Swan set fractions of :27.2 and :56.2 before picking up the tempo heading to the stretch. At that point, Yoder got May Baby out to challenge and the battle ensued, with May Baby prevailing in the win. Shape Shifter and Peter Wrenn finished third.

Trained by Yoder, May Baby is now one for one in 2020. The time in the Star Destroyer Final was a new career best for the Guccio filly, who was bred by Oakwood Farms of Montgomery, Ind. Cheyenne Yoder owns May Baby, who now has in excess of $241,000 in career earnings.

Later in the card Crook Boyzz and Tetrick scored the win in the $18,000 Jerry Landess Final. Starting from post three, Crook Boyzz waited for the dust to settle after the quarter before moving out and taking control of the race. The Always a Virgin sophomore gelding kept right on rolling in the stretch, scoring the win by one and three-quarters of a length over Star Island and Sam Widger. Skyway Trooper and Brandon Bates finished third.

Crook Boyzz is owned by John Esposito, Robert Esposito and Brett Selby. Selby also trains the gelding, who is two for two in 2020. His time of 1:51.4 in the Landess Final is a new lifetime mark. Crook Boyzz was bred by Wilbur Lengacher of Grabill, Ind.