Massive Stride and Elliott Deaton turned in a near gate to wire effort for a win on the pre-Thanksgiving racing card Wednesday, Nov. 23 at Northfield Park. The duo covered the half mile over in a final time of 1:59.1. 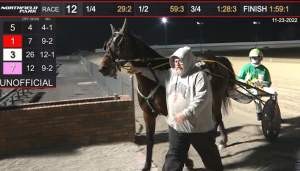 Massive Stride is led into the winner’s circle at Northfield Park following her win Wednesday, Nov. 23 in a new lifetime mark of 1:59.1.

Massie Stride was one of several horses heading out for the lead at the start. Horses were five across the track heading into the first turn with Massive Stride eventually getting the edge and moving over to the lead heading down the backstretch the first time. The Muscle Massive filly was comfortable with her ears up heading by the quarter in :29.2 before getting a bit of a breather to the half in :59.3. The second flow of traffic had formed led by Indiana sired Meadowbrook Eva and Eric Tharps Jr. However, she could not make up much ground on Massive Stride through the three-quarters in 1:28.3.

At the top of the stretch, Massive Stride was still in full command with very little urging from Deaton. The sophomore filly coasted home for the win by one length over Fencer and Jason Thompson for second. Meadowbrook Eva finished third in a three-horse photo that placed her up to third due to a breaking violation by one of the horses in the photo.

Massive Stride paid $10.80 for the win. The filly is owned by Darin Miller and Robert Strain. Larry Clabaugh trains the filly bred by Victory Hill Farm.

It was the sixth win of the year for Massive Stride and a new lifetime mark. The filly moved to her current connections in late June of this year after racing at Harrah’s Hoosier Park at two in Indiana Sires Stakes action. After changing hands, she competed on the Indiana Sired Fair Circuit under the direction of Doug Rideout this fall before returning to Ohio in October.

Massive Stride is a sister to several Indiana racehorses, including Smooth Aceleration, who has a mark of 1:54.2 and nearly $200,000 in earnings. She is from the first Indiana crop of Muscle Massive, who relocated to Indiana from Pennsylvania for the 2018 breeding season. She was an $11,500 yearling purchase at the Hoosier Classic Yearling Sale.