Massive Profit and Michael Oosting turned in a perfect effort to score the win in the $12,500 first leg of the Chad E. Carlton Trotting Series Wednesday, April 6 at Harrah’s Hoosier Park. The duo stopped the timer in 1:56.4. 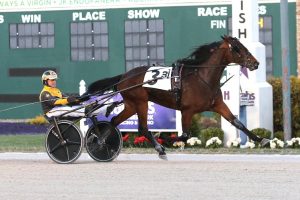 Massive Profit and Michael Oosting picked up a new lifetime mark in the first round of the Carlton Trotting Series Wed. April 6 at Harrah’s Hoosier Park. Photo by Dean Gillette

Massive Profit paid $6.60 for the win. The three-year-old Muscle Massive gelding is owned by Thestable Massive Profit of Ontario. Ross Leonard trains the gelding, who was bred by Gabriella’s LLC. Massive Profit is now two for three this season. The mile also marked a new career best for the lightly raced Indiana sired sophomore, who was making his first start for Leonard after racing at Woodbine earlier this year. He now has two wins in a row.

Massive Profit is from the first Indiana crop of Muscle Massive, who was moved to Indiana n 2017 from Pennsylvania. The colt was a $14,000 purchase from the Lexington Select Sale as a yearling. A total of 46 yearlings were sold by the Muscles Yankee stallion for his first year in Indiana.

Leonard also sent out another winner in the Carlton Trotting Series as Captain Sonny Fox and Oosting scored a win in the third division of the series. The Musclesprinctonian four-year-old traveled first over before grinding down the competition in the stretch for a win by a neck over Hustlenomics and John DeLong. Racer Dan and James Yoder finished third. The time of the mile was 1:58.1.

Captain Sonny Fox paid $4.00. He is owned and bred by Sally Gilbert. He is the son of Hoosier Jewel, a former Indiana Sires Stakes champion.

A third division of the Carlton Trotting Series was held with Nasey catching the win. Brandon Bates drove the three-year-old Pilgrims Chuckie gelding to the 1:57.0 win. Leander Schwartz trains the sophomore, who paid $17.20 for the win. Black and White Stable owns Nasey, who was bred by Roman Stoll.