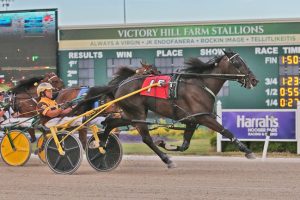 Driver Michael Oosting moved Marvelous Marshia out into the center of the track and began urging the filly forward, without going to the whip. The Always a Virgin filly hit another gear and paced right on by for the win in 1:50.1, one length ahead of Always Gonna B You and John DeLong and Trick of the Light. It took a final quarter of :26.1 to score the new lifetime mark.

Trained by Roger Welch, Marvelous Marshia was an upset winner, paying $19.60 for the win. She is owned by William DeLong, W. Patrick DeLong, Mia DeLong and Marsha Lewis Veitia. They purchased her from breeder Marc and Maynard Bontrager as the highest priced yearling by Always a Virgin in 2020. She was purchased under the name Hasiggitybom from the Hoosier Classic Yearling Sale for $42,000. She now has more than $100,000 on her card.

Marvelous Marshia is out of the Illinois bred mare Honey’s Luck, who has now produced three foals in six old enough to race with earnings over the six figure mark. She is also the dam of Amazing Arya, a daughter of Rockin Image with a mark of 1:51.2 and more than $344,000 in earnings. Her other six-figure winner is Madelines Blk Jack, a gelding by JK Endofanera, who was a winner in the first race of the night in conditioned pace action in 1:51.2.

The Friday card was packed with excitement at Harrah’s Hoosier Park. In addition to Indiana Sires Stakes, two eliminations of the Hoosier Cup were held with both ending in tight photo finishes. Ponda Warrior and Jimmy Whittemore moved first up around the final turn and rallied home to a win in 1:50.4, just a nose ahead of JK Victory and another neck head of Sure Thing Herman and Sam Widger. Ponda Warrior is trained by Jay Hochstetler and owned by Hochstetler with Finkelberg Racing LLC, and South of the Tracks Rac Inc. Ponda-A-Acres bred the Rockin Image sophomore gelding, who is three for four this year. He took a new lifetime mark earlier this spring in 1:49.1.

The other division of the Hoosier Cup was won by Rip Wheeler and Brandon Bates. The Rockin Image gelding got away in mid pack and was flushed out first over before grinding his way toward the leaders and getting the win by a head over The Longest Yard and Michael Oosting. Lucks On Time and John DeLong finished third in the 1:50.1 mile.

Rip Wheeler is trained by Walter Haynes Jr. for owners Jeff Fought Racing and David Fought. The homebred hails from Cornerstone Stock Farm, and has not finished worse than third in eight starts this season. The mile was a new lifetime mark for the colorfully named gelding.