Marla’s Got Legs and driver Clint Coy turned in a perfect performance to grab a new lifetime best during the second day of action at the Converse Fairgrounds Thursday, June 9. The three-year-old filly now has a career best time of 1:58.4. 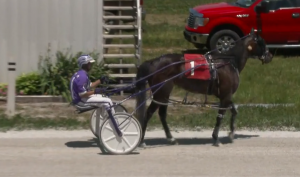 Marla’s Got Legs and Clint Coy scored a new career best at Converse during the ISFC Thursday, June 9.

Starting from post one, Marla’s Got Legs got out of the gate well and secured the spot right behind AL Perfection and Clay Craib. They followed along through fractions of :29.2 and :59.1 before Rockstars Dynamite and Jordan Ross were the first to pull to the outside to challenge at the three-quarters in 1:28.0. Around the turn, Marla’s Got Legs began to move in on AL Perfection and found the room she needed to slip to the outside and pace home in :30.3 for the win by a neck over AL Perfection. Velstraightdreamer and Bradley Ferguson finished third.

Marla’s Got Legs, a daughter of Tellitlikeitis, is owned by breeder Faron Parr and trained by Kevin High. It was her first win of 2022 in her sixth start. Overall she has four wins and topped $11,000 in earnings with the latest victory.

In the other division of three-year-old pacing fillies, Mystical Image and Jacob Fox turned in a commanding performance to win in gate to wire fashion in 1:57.2. The Always a Virgin sophomore paced home in a quick :28.4 to win by three and one-half lengths over Zig Zag Zoom and Carson Conrad. Babe’s Darla and Jordan Ross finished third.

Twoforone Stable and Mystical Marker Farms LLC own Mystical Image. She is trained by Fox.

The quickest mile of the day was awarded to Vel Larry in the final division of three-year-old colt and gelding action. The He’s Gorgeous gelding posted a gate to wire effort to win by two and one-quarter lengths in 1:56.4, a final panel in :29.4. Clay Craib guided the gelding to victory for owners Scott Linville and John Pitts. Scott Linville trains the well-bred son out of the mare EJ’s Copperstone, a former Indiana Sires Stakes winner of more than $348,000 with a mark of 1:52.2 during her racing career.

The ISFC will travel to the Harrison County Fairgrounds Thursday, June 16 and Friday, June 17 at Corydon for it’s next stop in the “Quest for the Governor’s Cup.” Full programs and live streaming is always available on the ISA Website at www.indianaharness.com.