Mark Herschberger just began his driving career this summer on the Indiana Sired Fair Circuit (ISFC) and now he has his first win. The 27-year-old earned his first win Saturday, Sept. 17 at the Elkhart County Fairgrounds in the second race of the day behind trotter You Do Know. 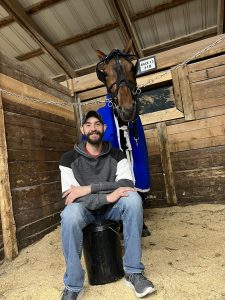 Mark Herschberger earned his first career driving victory less than a month after he received his license behind the two-year-old trotter You Do Know Saturday, Sept. 17 at the Elkhart County Fairgrounds.

Starting from post one, You Do Know and Herschberger went straight to the lead and established fractions of :31.3 and 1:03.4 before feeling pressure on the outside from Dover Glide and Logan Loney. By the three-quarter mile marker, You Do Know was still leading the way in 1:34.3.

In the stretch, You Do Know was still on the lead, but Haven Lane Milan and Carson Conrad, who had been tracking the top pair all the way through the race from the two-hole, moved out to challenge. The race was on to the wire with You Do Know getting the win by a nose over Haven Lane Milan. Dover Glide finished third. The time of the mile was 2:05.4.

You Do Know is from the first crop of You Know You Do. He is owned by JP Racing LLC, James Tisch, and Crazy Parrot Farm LLC. Joe Putnam trains the freshman trotter, who was bred by Mast Standardbreds. It was the second career win for the colt with his mile in Goshen, Ind. establishing a new lifetime mark.

Herschberger, who works for the Putnam Stable, was born in Champaign, Ill. and now resides in Chesterfield, Ind. He was making his seventh career drive behind You Do Know to earn his first win. Prior to that, he had finished second three times in six starts. His first career drive was less than one month ago at Connersville with the Joe Putnam trained Fanfoss. It was the first time Herschberger had driven You Do Know.

Herschberger is working on his pari-mutuel license. To date, he has three qualifying starts at Harrah’s Hoosier Park. He also finished second with Fanfoss at the Elkhart County Fairgrounds on Saturday, his only other drive on the day.