Brooke Nickells has two Standardbred mares that have become best friends, Baby MC and Stable Eyes. Both mares were successful on the track and both are now retired to the next phase in their careers as brood mares. 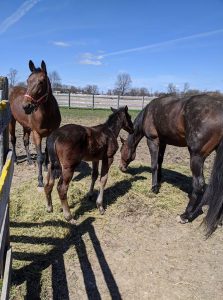 This new foal by Stevensville, is out of the Nickells Stable mare Baby MC. The colt is now being raised by two moms. Stable Eyes lost her foal and stays close to the foal out of her best friend, Baby MC. Photo by Brooke Nickells

Owned by Tim Clevenger of Anderson, Ind., Stable Eyes completed her racing career in 2018 at the age of 10. The Million Dollar Cam mare won 43 races and in excess of $250,000 with her career best time of 1:51.0 taken as an eight-year-old. She was bred to Aracache Hanover last year and was expecting her first foal this spring. However, she lost her foal.

Baby MC is a little more experienced in the brood mare ranks. The McArdle mare, who raced for the Nickells Stable during her career, won nine races and more than $88,000 in career earnings. Her best time was taken as a three-year-old in 1:52.1 at The Red Mile. Retired after her 2012 campaign, Baby MC is out of the Nickells’ great race mare My Baby and Me, who won 18 races and in excess of $238,000 with a mark of 1:51.3 taken at five at Harrah’s Hoosier Park.

Baby MC was expecting her sixth foal this spring. She has already produced two with race marks under 1:56 (McPockets and Panther’s Pinot) and had a bay colt Feb. 16 by Stevensville, first crop sire in the state of Indiana.

In an odd twist, the mares are no co-parenting the colt. Stable Eyes, affectionately known as “Emma”, has joined Baby MC in caring for the foal. He will be part of the Class of 2022 as he grows into a racehorse under the watchful eye of Baby MC and Stable Eyes.