The Elkhart County Fairgrounds will close out three sessions of racing Tuesday, July 26 with two divisions each of the Maple City Trot. The fillies will take the track first in two divisions followed by two divisions for the three-year-old trotting colts and geldings. 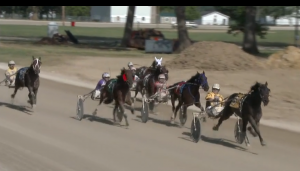 Crescent Beauty and Doug Rideout lead the way down the stretch at Portland in ISFC action earlier this summer.

Walk With Me will be the one to watch in the first division of the fillies, going for a purse of $6,400. The Striking Lindsey filly is five for 10 this season with her fastest time taken at Portland in 2:02.0. Doug Rideout trains and drives and will accompany the filly from post three in the five-filly lineup.

The second division has some good matchups with Crescent Beauty drawing post one for Rideout. The Crescent Fashion filly has won seven starts this year with her fastest recorded in 2:02.4 on the ISFC. She will meet up with Fashion’s Way, another filly by Crescent Fashion, from post two with Jordan Ross in the bike. Mervin Schmucker trains the filly that has three wins this season.

Two newcomers will also be included in the second division of the Maple City Trot for fillies. Jesses Doll, trained by Bill Webb, and My Sweet Mi Mi, trained by Robert Taylor, both sport fast wins this year in 1:56.1 and 1:56.4, respectively at Harrah’s Hoosier Park. Jesses Doll will be guided by Jay Cross from post four while My Sweet Mi Mi will be driven by Taylor from post five.

Rideout has two powerhouse sophomores in the colt and gelding division of the Maple City Trot. Lonestar Fashion, winner in five of his starts this year with the quickest in 1:59.4 on the ISFC, starts from post five in the first division while Hand Dover Dan, winner of five races and a best time of 1:57.2 taken at Harrah’s Hoosier Park, featured in the second division from post three.

Newcomers to the County Fair circuit include Starlit Dandy from the Mike Hollenback Stable in the first colt and gelding division. The Dover Dan sophomore has been among the top three in six of his nine starts this year with his best time of 1:55.0 taken at Harrah’s Hoosier Park. Hollenback drives from post one. The race also includes Piningforgold from the Kevin Slabaugh barn who has a mark of 1:56.1 this season. The Muscle Massive three-year-old will start from post two in the first division with Slabaugh in the bike.