Mallard Hanover and Atlee Bender were favored in the $22,000 Expresson Final Wed. May 12 at Harrah’s Hoosier Park and they didn’t disappoint, scoring the victory in 1:53.3 to remain undefeated in 2021. 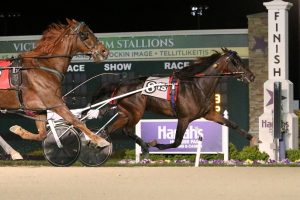 Starting from post eight, Mallard Hanover floated over to the inside from the start, getting away in fourth as Illini Earl and Trace Tetrick set early fractions of :28.0 and :57.2. Shortly after the half, Mallard Hanover was flushed out first over around the final turn and began to motor home.

In the stretch, Mallard Hanover made up ground on the front runners and then fended off the late closers, closing in :27.4 for the win, just a neck ahead of Katkin Morgan and James Yoder, who rallied from the back of the pack in :26.3 to just miss the victory. Swingforthefences and Peter Wrenn also closed well for third.

Trained by Erv Miller, Mallard Hanover paid $3.00 for the win. He is owned by Harmony Oaks Racing Stable, Inc., Ervin Miller Stable and George Golemes. Hanover Shoe Farms bred the sophomore son of Swan for All, who is now four for four this season. The gelding did not race at two. The mile in the Expresson Final set a new career best for Mallard Hanover. The trotter was a $7,000 yearling purchase from the Standardbred Horse Sale in Harrisburg by his current connections.