Makeitagaingo kicked off the 2021 racing season with a win at Miami Valley Raceway Monday, Jan. 4. The four-year-old daughter of Riggins pulled away for the win in 1:55.3 in the conditioned pace. 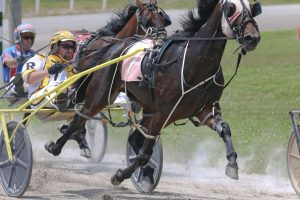 Makeitagaingo, shown at Frankfort as a two-year-old with Matt Rheinheimer driving, kicked off 2021 with a win at Miami Valley for her new connections. Photo by Dean Gillette

Guided by Jordan Ross, Makeitagaingo got away near the back of the pack as Three Babes and Mitchell Cushing set the early pace of the race. Ross had Makeitagaingo out following cover before the half in :57.3 and had moved into striking distance by the three-quarter mile marker in 1:26.1. From there, the mare kicked into another gear, striding home in :28.4 for the three and one-quarter length win over Three Babes. Rock My World TL and Chris Page rounded out the trifecta.

Owned by Devon Miller, Makeitagaingo recently joined the Robert Taylor Stable. After two years on the Indiana Sired Fair Circuit (ISFC) under trainer Curtis Sumpter, it was the second start under the direction of Taylor for Makeitagaingo. The daughter of Riggins now has nine career wins in 22 career starts. Her bankroll has improved to more than $32,000 and her career best time remains at 1:53.2 taken as a two-year-old at Harrah’s Hoosier Park. Marlin Ray Miller of New Paris, Ind. bred the mare.

Another impressive Indiana sired winner on the Monday card included Sweet Mr Pinetucky, co-owned and trained by Lester Raber. The now seven-year-od son of Pinetucky was a gate to wire winner in the afternoon’s featured $14,400 conditioned trot. Sweet Mr Pinetucky, driven by Trace Tetrick, held off Trumpets and Ed Greeno for the head win in 1:55.2. Pine Dream and Dan Noble finished third.

Sweet Mr Pinetucky earned his 26th career win in 135 starts. He is nearing $300,000 in career earnings and his best time was taken last year at six in 1:53.3 at Miami Valley Raceway.