Majors Miracle pulled off a longshot win in a division of the Kenneth “Dave” Stohler Memorial Thursday, April 7 at Harrah’s Hoosier Park. Driven by Don Eash, the sophomore filly won in 1:55.2. 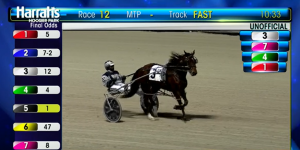 Majors Miracle made her 2022 debut a winning one for the Eash Stable Thurs. April 7 in a division of the Stohler Memorial.

Starting from post three, Majors Miracle was able to slide over to the inside and get an inside seat behind Goldies Rockin and John DeLong, who powered to the lead from the outside. Goldies Rockin led the way past the quarter in :28.2 and half in :57.2 before feeling the challenge of Cat’s Image and Ricky Macomber Jr. on the outside around the final turn.

In the stretch, Majors Miracle appeared to be hopelessly locked in behind the leader. Eash waited patiently and tried to split horses but had to grab hold before getting a second chance. He then found the room he needed to advance with Majors Miracle, pacing home in :29.3 for the win by a half-length over Goldies Rockin on the inside and Ever A JK and Sam Widger finishing third on the outside.

Majors Miracle paid $26.80 for the win. The sophomore daughter of Luck Be Withyou is owned by Eash Racing Stable and also trained by Eash. Jonas Graber bred the filly, who was making her first start of 2022. She only had one win last year at two and her win in 2022 was a new career best.

Majors Miracle was one of 63 foals sold from the first crop of Luck Be Withyou. She was purchased by Eash at the Michiana Classic Yearling Sale for $5,000. She has a full brother that is a two-year-old this year named Luck Be Major.

The other division of the Stohler Memorial was won by Justine, a daughter of Huntsville. Driven by LeWayne Miller, the filly was parked at the quarter in :27.2 before reaching the lead. She was passed up in the stretch by Lucky Lil Lady and Sam Widger only to come back and win by a neck in 1:55.3. Barocknrolldream and Ricky Macomber Jr. finished second over Lucky Lil Lady.

Justine paid $14.60 for the win. The homebred filly is owned by Connie and Homer Hochstetler and South of the Tracks Rac Inc. Jay Hochstetler trains the filly, who was unraced at two. She now has one win and one second in two career starts for the Hochstetler barn.