Majestic Player A, the standout trotter from down under that was acquired by Brian Carsey last fall, continues to lead the nation in wins for all trotters, sharing the title with Designer Specs and First Gunner. All three trotters have scored 14 wins this season and Majestic Player A recorded his 14th win Saturday, Nov. 7 at Harrah’s Hoosier Park. 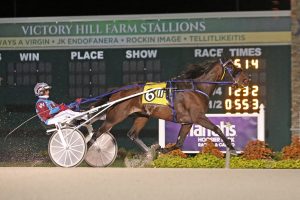 Majestic Player A, shown winning earlier this year at Harrah’s Hoosier Park for driver Sam Widger, continues to lead the nation in wins this year with 14 recorded in 22 starts. Photo by Dean Gillette

Trained by Walter Haynes Jr. Majestic Player A has only been out of the top three in three of his 22 starts this year. The six-year-old son of Majestic Son started his season off at Miami Valley Racing in February which began a 10-race win streak that carried over to multiple wins at Harrah’s Hoosier Park. He has traveled to several stakes during the summer and finished fourth in the Breeders Crown Open Trot two starts back.

With more than $230,000 accumulated for the partnership of Jeff Fought Racing, Brian Carsey and Casey Myers, all of Indiana, Majestic Player A’s best time was recorded at Hoosier Park in 1:51.1 and he was timed in 1:50.1 at The Red Mile during stakes action. Prior to coming to the United States, Majestic Player A won 15 races down under with just under $100,000 in earnings.