He was the favorite and he looked the part in the post parade. Lather Up and Montrell Teague proved why they are at the top of the list this season for pacing horses, rallying home in a track-record tying performance to win the 26th edition of the $330,000 Dan Patch Stakes. 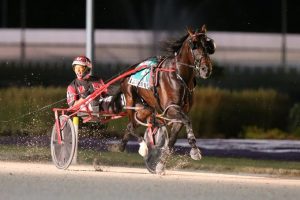 The face says it all. Montrell Teague lets out a cry of victory as Lather Up scores the title in the 26th edition of the Dan Patch Stakes at Harrah’s Hoosier Park. Photo by Linscott Photography

Lather Up got away third along the inside as Filibuster Hanover and Yannick Gingras bolted to the front accompanied by Jimmy Freight and Scott Zeron. The timer stopped at 24.4 at the first quarter mile marker, the quickest first quarter ever at Harrah’s Hoosier Park.

Teague tipped Lather Up to the outside and sped to the lead before the half in :53.3, slowing the tempo down considerably. McWicked and Brian Sears were first up around the final turn with Always A Prince and Trace Tetrick right on their helmet. In the stretch McWicked went right on by Lather Up and it appeared the superstar was done. However, when the passing lane opened up, Lather Up shot up the inside. He pulled away to a two and one-half length victory with a final quarter in :25.2 under a hand drive by Teague, who let out a “war cry” as he crossed under the wire. McWicked was second over Endeavor and Sam Widger, who closed from the back of the pack for third.

Owned by breeders Gary and Barbara Iles of Delaware, Lather Up also has some new connections. Peter Lurie announced that Taylor Made Stallions, who purchased part of Lazarus N last year, had also bought into Lather Up. The four-year-old I’m Gorgeous scored his eighth win in his 11th start of the season for Clyde Francis, trainer for the George Teague Stable.  It was the fourth straight win for Lather Up.

The Dan Patch was broadcast live on WISH TV Channel 8. Sharon Beeman sang “Back Home Again in Indiana” before the horses came out of the front paddock for the post parade, donning matching Dan Patch blankets.