Maggie Rhee and driver Trace Tetrick turned in a solid performance Monday, March 28 with a gate to wire effort at Miami Valley. The mare won the $17.500 conditioned pace for females in a time of 1:51.2. 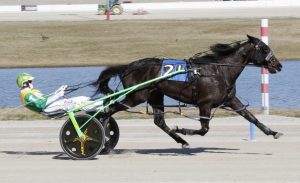 Starting from post two, it was a straight path to the lead for Maggie Rhee as St Lads Gidget and Brett Miller, who started from post one, got right in behind the mare. Fractions of :27.1, :55.1 and 1:23.0 were posted on the board before Maggie Rhee was asked for more speed.

In the stretch, Maggie Rhee paced home in :28.2 to win by two and one-half lengths over St Lads Gidget. Bad Sammie and Chris Page rounded out the trifecta.

Maggie Rhee was the favorite of the field, paying $3.20 for the win. The Jereme’s Jet five-year-old is owned by Wilson Racing Stable, Norman Neff and Mark Eichberger and trained by Tim Wilson Jr., who is stabled in Indiana preparing for the 2022 meet. John Leahy bred the mare, who now has two wins in five starts for 2022. Overall, she has 18 wins in 42 starts with more than $187,000 in career earnings. Her career mark was taken as a three-year-old at Harrah’s Hoosier Park in 1:50.1.

Magie Rhee is out of The Big Dog mare named Bow Wow Wine, who made more than $260,000 and took a mark of 1:50.4 during her racing career. She has produced four straight foals with marks of under 1:54, including Gold Rush with a mark of 1:53.3 and $126,000. She also has a yearling this season named Midwest Moscato who is a full sister to Maggie Rhee.

The end of the card had three straight Indiana sired winners Monday at Miami Valley, including Shady Deal, a seven-year-old son of Shadyshark Hanover. The gelding swooped around to the lead after the half and never looked back to sore the win in 1:54.0 among claimers. Nob Hill Flash and Sam Widger finished second over He’s a Dickens and Brett Miller for third.

Driven by Tony Hall, Shady Deal paid $8.20 for the win. He is owned by John Fitzwater and was bred by Paul Webb. Art Gillum Jr. trains Shady Deal, who now has six wins on the pace. He started off his career at age two on the trot before switching over to the pace. His career best time was taken last year as a six-year-old at Northfield Park in 1:53.1.