The Miss Windfall Series is a longtime event held at Harrah’s Hoosier Park, honoring the Indiana Standardbred Hall of Fame horse since the late 1990s. Several top Indiana sired horses have won the event over the years and Made of Platinum added her name to the list Thursday, April 22 at Harrah’s Hoosier Park. Guided by Ricky Macomber Jr., Made of Platinum scored the win in 1:53.2. 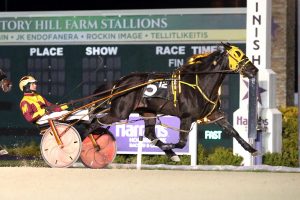 Made of Platinum has found her winning stride as a three-year-old earning a new career best time in the Miss Windfall Series Final with Ricky Macomber Jr at the controls. Photo by Dean Gillette

Starting from the center of the track, Macomber moved Made of Platinum over to the inside path, following along in seventh early on as Pure Cotton and Doug Rideout set the first fraction of :26.4 before being overtaken by race favorite Kak’s Rev It Up and Sam Widger before the half in :55.2. A mild third quarter allowed traffic to form on the outside heading to the stretch, which included Made of Platinum in second over style.

In the stretch, Made of Platinum kicked into a closing gear that took her to the wire in :28 seconds for the win, two lengths ahead of Alwaysthebstplace and Michael Oosting. For Sharks Sake and John DeLong finished third.

Made of Platinum paid $7.00 for the win. The JK Endofanera filly is owned by Nicholas Catalano, Keith Pippi, Stephen Moss and Timothy Betts. Missy Essig trains the flashy filly, who was bred by John Miller.

Made of Platinum only had two starts last year as a freshman with two runner-up finishes. She has returned this season with a great start, winning two of her three starts. Her mile in the Miss Windfall final also set a new career best time for her connections. A daughter of Marks Mindy, former Indiana Sires Stakes winner with earnings of more than $350,000, Made of Platinum is from the first crop of JK Endofanera. She was purchased from the Hoosier Classic Yearling Sale in 2019 for $10,000 under the name Endo Vicki.