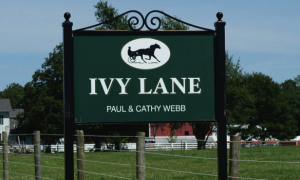 Starting from post seven in the eight-horse field, Maddison Ivy got away in mid pack and was forced to move three-wide around the final turn before wearing down the pace setter Don’t Dally Sally and Aaron Merriman for the win by one-half length. Natural Disaster and David Lake finished third in the $7,000 conditioned pace.

Maddison Ivy is owned by Bernard Brown of Michigan. The sophomore pacing filly was bred by Dr. Paul Webb of Ivy Lane Farm of Goshen, Ind., carrying the trademark “Ivy” in her name. She was a $14,000 purchase from the Hoosier Classic Yearling Sale in the fall of 2017 by Tim Roach, who is the trainer of Maddison Ivy.

Ivy Lane Farm will welcome a new stallion to their roster beginning in 2020 as Freaky Feet Pete joins their program. The Rockin Image horse recently retired with more than $1.5 million in earnings and a Breeders Crown title to his credit. He will stand for a fee of $3,500.