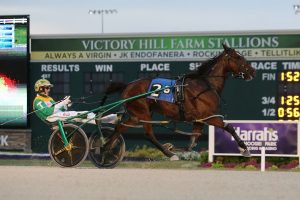 Starting from post eight, M E Radar Girl moved near the back of the pack as Rosetta Star and Trevor Smith rolled by the first quarter in :27.3, quickly taken over by Brown Brinny and Jeremy Smith. Brown Brinny went on to cut the rest of the mile as M E Radar Girl was able to gain cover at the half.

At the top of the stretch, Tetrick had M E Radar Girl in full gear, surging home in :28.2 for the win by one and three-quarter lengths over Tell Marcia and Tyler Smith. Cenalta Diamond and Chris Page, Dayton’s leading driver this year, finished third.

M E Radar Girl was the favorite of the conditioned $10,350 field, paying $5.40 to win. She is trained by Tyler George, who recent earned his first career training title at Harrah’s Hoosier Park. Bred by Lester Schmucker, M E Radar Girl is owned by SCP Stable Inc. of Georgia and George of Ohio.

Other Indiana sired winners on the night included Jesse V, a six-year-old son of Jailhouse Jesse driven by Brandon Bates and trained by Kathy Millman, who also owns the trotter. The time of the mile was 1:58.0.

Western Sierra and Tyler Smith were also victorious by a neck over Givemeonemoreshot and John DeLong in a conditioned pace for fillies and mares. The Straight Shooting three-year-old filly, bred and owned by John Barnard, won the race in 1:54.1 for trainer Luis “Tony” Quevedo.

The final Indiana winner on the night was Rose Run Vision for trainer Don Eash. Driven by Gerald Miller, the Time to Roll sophomore filly got up in the final strides to win by a nose in 1:55.0 in a three-way photo with Got Power and Chris Page and Bellini Seelster and Josh Sutton. Rose Run Vision, owned by Eash Racing Stable, was a big winner, paying $31.60 to win.