Luckychris was a force on the Indiana Sired Fair Circuit (ISFC) last summer when he started his racing career. Now at three, the Indiana sired colt is back with a strong showing in his seasonal debut at Oak Grove Racing Monday, May 9. 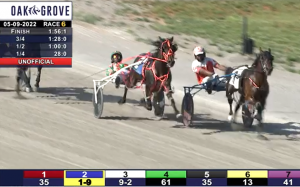 Luckychris and Clifton Bell (inside) fend off Heavy Pressure and Archie Buford in the final strides of the race at Oak Grove Racing Monday, May 9.

Starting from post three, Luckychris went out for the lead but was held on the outside by Heavy Pressure and Archie Buford at the quarter in :28.0. Driver Clifton Bell pursued the top with Luckychris and was settled in on the top spot before the half in 1:00.0. From there the sophomore colt had a big hold on bell, passing the three-quarters in 1:28.0 before Heavy Pressure moved out to challenge.

In the stretch, Luckychris was under a big challenge from Heavy Pressure, who was gaining ground on him. However, Luckychris held his ground and was able to fend off fellow Indiana sired sophomore Heavy Pressure, by Real Desire, at the wire by a nose for the win in 1:56.1. Jengish Chokusu and Todd Warren finished third.

Luckychris paid $11.80 for the win. The Luck Be Withyou colt is owned by D and R Racing Stable. Curtis Rice trains the talented colt who is now one for one in 2022. Cletus Christner bred the colt, who now has eight career wins in 13 starts. Although he paced in 1:53.2 last year at Harrah’s Hoosier Park, his career best time of 1:55.2 was taken at the Indiana State Fair in the ISFC Governor’s Cup Championships.

Luckychris has only finished worse than second one time in his career. His bankroll is now over $35,000.

Also on the Monday card at Oak Grove was the $20,000 Open Pace for fillies and mares with another Indiana sired winner. Maggie Rhee, driven by Todd Warren, moved to the lead around the final turn and was able to pace home for the win, just a neck ahead of Tuapeka Jessie N and Kevin Wallis. Indiana sired Rollonbeauty and Christian Lind finished third.

Maggie Rhee paid $2.60 for the win. The five-year-old Jereme’s Jet mare is trained by Tim Wilson Jr. and owned by Wilson Racing Stable, Norman Neff and Mark Eichberger, all of Illinois. Maggie Rhee is now four for nine in 2022. Her career best time was taken as a three-year-old at Harrah’s Hoosier Park in 1:50.1. She now has more than $213,000 in career earnings for her connections.