A total of five two-year-old pacers recorded miles under the 2:00 during the third session of Indiana Sired Fair Circuit (ISFC) action at Converse Fairgrounds Wednesday, June 16. One of those standouts was Luckychris, driven by Clifton Bell, who established a new lifetime mark of 1:58.0 while rounding the half-mile oval at Converse. 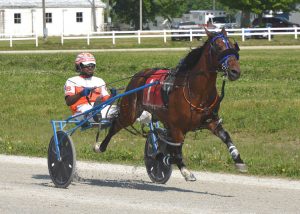 Bell sent Luckychris straight to the lead from post two, keeping a good hold of the front end as fractions of :30.3, 1:01.0 and 1:30 were established. The Luck Be Withyou colt kicked it up a notch in the final quarter, pacing home in 28.0 to score the win by two and one-quarter lengths. Luckonurside, also by Luck Be Withyou, finished second for driver Terry Skinner, pacing his mile in 1:58.2 followed by Yourwishisgranted and Jay Cross for third, who also paced in 1:58.3 during the mile.

Trained by Curtis Rice, Luckychris is owned by D and R Racing Stable of Kentucky. He is now three for three, all recorded on the ISFC circuit.

Rice, a native of Mississippi, first came north to race more than two decades ago, first landing in Illinois on the county fair circuit and later competing in Chicago. In recent years with the Illinois circuit diminishing, Rice has begun investing in the Indiana program, and last year, conditioned Rollonbeauty to the $20,000 Governor’s Cup Championship for two-year-old filly pacers. Both Rollonbeauty and Luckychris were affordable yearling purchases by Rice. Rollonbeauty was purchased out of the Michiana Classic Yearling Sale for $5,200 while Luckychris was purchased last fall at Hoosier Classic Yearling Sale for $5,000.

The previous track record for two-year-old colt and gelding pacers was established in 2018 by Farmers Tan and Charlie Conrad. The duo set the record in 1:59.3 for driver Brian Barnes and owners Diamond H Racing Stable, who also bred the son of Always a Virgin.

Luckychris is one of four freshman pacers on the ISFC that are undefeated in three starts. He is joined by Rockin Bambi, trained and driven by Terry Skinner, a two-year-old daughter of Rockin Image who was a winner earlier on the card in 2:00.1, Velstraightdreamer, a daughter of Straight Shooting from the Larry King Stable, who won in 2:01.0 for Kevin Lambright, and Pure Silky from the Doug Rideout barn, also undefeated in three starts, winning on the Wednesday card in 2:03.3.

In the very next race following the win by Luckychris, Riggins Revenge and Terry Skinner scored a win in 1:58.3. The Riggins colt, owned by Kendrick Stewart of Mississippi, was a gate to wire winner, two and one-quarter lengths ahead of DP Realordeal and Doug Rideout, who paced their mile in 1:59.0. Vel Larry, driven by Kevin Lambright, finished third.

The ISFC is back in action at Converse Thursday, June 17 featuring two-year-old trotters and three-year-old pacers.