It appears Trainer Curtis Rice has another emerging Indiana star in his stable. After winning a Governor’s Cup Championship last fall, Rice is now seeing success with his two-year-old pacing colt Luckychris. Driven by Clifton Bell, the duo is now two for two in the Indiana Sired Fair Circuit (ISFC). 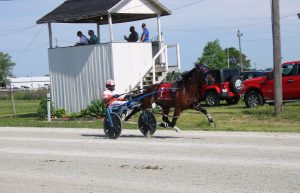 Luckychris and Clifton Bell are now two for two on the ISFC after winning their second race at Corydon Thursday, June 10. They are pictured above at Converse. Photo by Diane Shuler

Fresh on the heels of his dominant performance at Converse Friday, June 4, Luckychris was ready to roll again at the Harrison County Fairgrounds, moving out to an early lead by four lengths and extending that advantage at every pole. Setting fractions of :30.0, 1:01.4 and 1:32.2, Luckychris drew away to a 14-length advantage at the wire n 2:01.0, a final panel in :28.3. Vel Gorgeousforeal and Kevin Lambright finished second over Vel Carl and Clay Craib for third.

Luckonurside and Terry Skinner also scored a front-end win for sire Luck Be Withyou. The two-year-old gelding got to the lead and was challenged on the outside by Vel Mark and Clay Craib at the half, but held their ground and drew off for the win by nine and three-quarter lengths in 2:05.1. Vel Mark finished second over Be A Lucky Star, also by Luck Be Withyou, and driver Logan Loney for third.

Luck Be With Tina and Jordan Ross was the third set to win for sire Luck Be Withyou. The two-year-old filly sat patiently in the two hole as Vel What A Journey and Kevin Lambright set the fractions. Ross pulled Luck Be With Tina to the outside in the final turn and lengthened her stride to the wire, winning by one and one-quarter lengths in 2:04.2. Vel What A Journey was a solid second over Vel Rosemel and Clay Craib for third.

Luck Be With Tina, trained by Robert Taylor, is owned by Larry Poindexter of Tennessee. Jake Schwartz bred the freshman filly.