Lucks on Time and Brandon Bates turned in another impressive performance in the first round of the $9,000 Jerry Landess Series Friday, April 8 at Harrah’s Hoosier Park. The event is named in honor of Indiana Hall of Famer Landess and was one of the initial series which began in the 1990s when pari-mutuel racing began in Indiana. 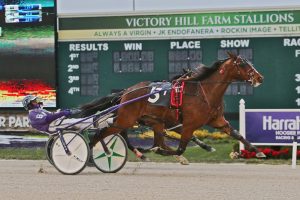 Lucks on Time earned his second straight win in 2022 for Brandon Bates in the first round of the Jerry Landess Series Friday, April 8 at Harrah’s Hoosier Park. Photo by Dean Gillette

Starting from post five, Lucks on Time made his intentions known early by rallying toward the lead, getting in behind first race leader DP Realordeal and Trace Tetrick through the quarter in :27.0. Lucks on Time then moved out and around to take over the lead at the half in :57.0. From there, he put distance between him and the rest of the field before picking up the pace in the stretch.

Lucks on Time rallied home in :25.4 for the win, fending off DP Realordeal, who closed in late on the inside with a final panel in :25.2, for the win. Corporalpunishment and John DeLong finished third.

Lucks on Time paid $2.80 as the heavy favorite of the field. Leander Schwartz trains for the Black and White Stable. The winning time of 1:53.2 was a new career best for the son of Luck Be Withyou.

Lucks on Time is now two for two this year. The lightly raced gelding from the first crop of Luck Be Withyou won three of five races last year before returning to the track at three this season. The well-bred gelding has many champions in his blood, including Bay Fishen Doc (1:51.4, $354,000) and Rollonbeauty (1:51.2, $159,000).

JK Standingovation and Trace Tetrick were winners in the other division of the Landess Series. The JK Endofanera gelding moved to the lead at the half in :56.4 and never looked back, scoring the win in 1:53.2, the same time posted as Lucks on Time. Lucks Desire and Peter Wrenn finished second over Heavy Pressure and Archie Buford for third.

JK Standingovation paid $3.00. He is trained by JL Adams and owned by Martin Valentic of Pennsylvania. It was the third win in five starts for the gelding, who went winless in seven starts last year at two. It was also his first start of the year at Harrah’s Hoosier Park after shipping in from The Meadows. He competed in a couple divisions of Indiana Sires Stakes last season and also raced in the Kindergarten Series at The Meadowlands. The mile marked a new lifetime mark for JK Standingovation, who is a half-brother to Rockin Speed, who has a mark of 1:49.1 and more than $349,000 and counting.