The Elkhart County Fairgrounds will be buzzing with activity Monday, July 25. Due to weather, the Saturday program featuring 7 races, five of which are for the Indiana Sired Fair Circuit (ISFC),will now join 13 races already placed on the day. Action begins at 10 a.m. with the second card beginning immediately following at the Goshen, Ind. track. 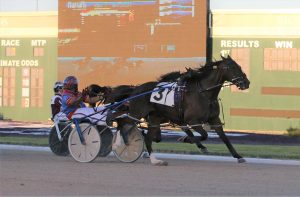 Frequent Image and Robert Taylor turn in a new lifetime mark of 1:50.4 earlier this summer at Harrah’s Hoosier Park. Photo by Dean Gillette

The Monday card will feature three divisions of the Classic 31 Pace. One division of sophomore fillies will be held followed by two divisions of the three-year-old colt and gelding pacers. The race always attracts some attention from some newcomers on the scene with the second division featuring Frequent Image, a Rockin Image gelding from the Robert Taylor barn. Taylor is set to drive the sophomore pacer from post five in the six-horse lineup.

Frequent Image took a mark of 1:50.4 earlier this year and has finished among the top three in six of his 10 starts this season. He has more than $25,000 now on his card after not hitting the board in five starts last year at two.

Frequent Image will see a challenge from fellow Harrah’s Hoosier Park contender Odds On Alpha Male and Peter Wrenn. Hailing from the Melanie Wrenn barn, the Odds on Equuleus colt also has a mark of 1:50.4 taken earlier this summer. He starts from post two in the $6,450 Classic 31 Pace.

The first division of Classic Pace colts has attracted an entry from Lucks on Time from the Missy Essig barn. The Luck Be Withyou sophomore has won four races this year with his best time recorded in 1:51.4. He starts from post five with Michael Detweiler getting the call to drive.

Pure Silky looks to be a major contender in the filly division of the Classic Pace. Trained and driven by Doug Rideout, the Tellitlikeitis filly has four wins this season with her best time clocked in 1:51.4. She will start from post five in the seven-horse lineup that puts one trailer on the track.

The Wrenn Stable has also entered a filly in the Classic Pace as Odds On Number One will be guided by Peter Wrenn from post four. The Odds On Equuleus filly scored her only win this season in 1:52.2.