It was a battle to the finish between two JK Endofanera fillies with Loraine Smoke getting the nod in the photo over JJ Endofanera. It was the sixth round of Indiana Sires Stakes action for the freshman fillies, vying for a purse of $67,500. 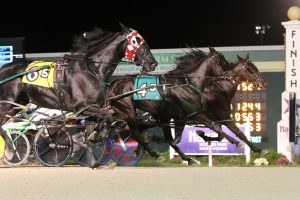 Lorraine Smoke and James Yoder fend off JJ Endofanera on the outside and Goo Goo Won on the inside during the final preliminary round of Indiana Sires Stakes action for two-year-old filly pacers. Photo by Dean Gillette

Lorraine Smoke began her race from post four for trainer-driver James Yoder. JJ Endofanera went off stride before the start and trailed the field by 14 lengths at the first quarter in:26.3. Dancin Image and Sam Widger reached the top spot at the quarter but were overtaken by JK’s Rollin Baby, another daughter of JK Endofanera who was driven by Trace Tetrick. JK’s Rollin Baby continued to lead the way through fractions of :55.3 and 1:24.4 before feeling pressure from Goo Goo Won and LeWayne Miller at the head of the lane.

Lorraine Smoke had gotten into the outer flow around the final turn and was primed to pace home with a big final quarter. The filly paced the stretch in :26.4, but hot on her heels was JJ Endofanera, who was closing quickly, clocking her final panel in :26.2. In the end, Lorraine Smoke was a winner by a head in a three-way photo with JJ Endofanera and Goo Goo Won, finishing in the top three spots respectively.

Lorraine Smoke paid $10.20 for the win, which was recorded in 1:52.4. She is owned by Cheyenne and James Yoder and was bred by Lyle Bontrager. It was a new career best for the filly, who now has two wins in 12 tries with more than $126,000 in earnings. She was purchased out of the Michiana Classic Yearling Sale last fall for $13,000 by the Yoders.

Later in the card, another division of two-year-old pacing fillies was contested with Always Gonna B You and John DeLong taking home the top prize in a time of 1:51.1. The Always a Virgin filly was up close most of the mile before tipping out in the stretch and pacing home in :26.3 for the win by two lengths. Trick of the Light, who cut most of the mile for Trace Tetrick, finished second over Hedda Hopper and Michael Oosting for third.

The sixth round was the final preliminary leg to set up the $250,000 finals on Indiana Super Night set for Friday, Oct. 15.