Two-year-old pacing fillies were in the spotlight Thursday, Sept. 9 in two divisions on the card. Lorraine Smoke and James Yoder were impressive in their win, scoring the victory in 1:53.2. 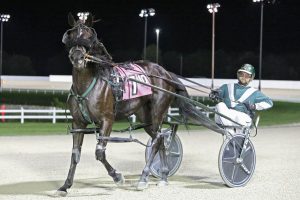 Starting from post seven, Lorraine Smoke left out of the gate seeking a spot near the leaders and was parked in mid-pack through the quarter in :27.3 before finding a resting place in seventh. Shakeanera and Peter Wrenn had the first lead, but Hedda Hopper and Michael Oosting took over at the half in :57.3. Yoder moved Lorraine Smoke back out around the final turn behind cover as JJ Endofanera moved the outer flow to the lead in 1:25.4.

Lorraine Smoke began to set her sights on the leaders and closed quickly, passing up rivals and eventually capturing the win over JJ Endofanera by a neck, pacing her final panel in :26.1. Hedda Hopper finished third.

The longest shot on the board, Lorraine Smoke paid $173.80 for the win. She is owned by Yoder and his wife, Cheyenne. The JK Endofanera filly was bred by Lyle Bontrager. It was the first win in nine starts for the freshman filly, who was purchased for $13,000 from the Michiana Classic Yearling Sale last fall.

The other division was won by Ms Quick Sand, also a longshot. The Always a Virgin filly, driven by Brandon Bates, sat patiently in the two-hole as Trick of the Light and Michael Oosting set fractions of :27.1, :57.0 and 1:25.2. Bates tipped the Ms Quick Sand filly around Trick of the light for the win by a neck, a final panel in :27.1 in the 1:53.0 mile. Goo Goo Won and LeWayne Miller finished third.

Ms Quick Sand paid $54.20 for the win. She is owned by Ken Rucker and The Panhellenic Stable Corp. Lavon Miller bred the filly, who is trained by Rucker.