Look at J and Jordan Ross scored their third straight win Thursday, Oct. 28 at Harrah’s Hoosier Park. The duo lowered their career best to 1:53.4 in the process. 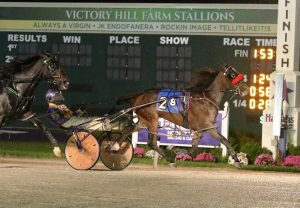 Ross took advantage of his inside post with Look at J and used early speed to secure the spot right behind early leader JK’s On the Move driven by Trace Tetrick. As fractions of :28.2, :56.2 and 1:24.4 were placed on the board, Look At J was waiting for the stretch to make his move.

In the stretch, Walkin Papers and Michael Oosting moved up on the outside but Look At J was able to find the room he needed late in the race to sneak through and win by three-quarters of a length. JK’s On the Move finished second over Walkin Papers for third.

Look At J paid $13.80 for the win. The gelded son of Aracache Hanover is a homebred for Taylor Racing LLC and Robert Taylor handles the training duties.

The very next race brought another surprise winner from the two-year-old ranks to the winner’s circle as Skyway Professor and LeWayne Miller rallied home late for the win in 1:57.3. A final quarter trotted in :28.2 made them a one and one-half length winner over Pappap’s Class Act and Robert Taylor and Danny Dancer and Jay Cross.

Skyway Professor paid $48.00 for the win. He is owned by LeWayne Miller, Ryan Raber, Darvin Wagler and Hoosier Standardbred Farm. LeWayne Miller trains the product from the Kenneth Slabach breeding operation. It was the second win in seven starts this season for the Swan for All gelding. The mile also marked a new career best for Skyway Professor.